Custom Sportswear: Why is it So Popular?

Custom sportswear has been a main feature for sports clubs for many years. But why is it so popular? Well, competitive sports often involve different teams playing against each other. So custom sportswear helps the players and supporters differentiate the sides, therefore, enhancing performance.

And that’s just at a very top level too. There are various reasons and benefits for professional and amateur teams utilising custom sportswear. This post will outline the key benefits and motives for teams having their own uniforms and branding – from being proud about their rich history and heritage to bringing a certain level of flair and style to their game.

What is Custom Sportswear?

From football and netball to rugby and basketball, you’ll notice that teams of all abilities around the world use custom sportswear. For example, if we mentioned global giant teams like Manchester United, Los Angeles Lakers and New Zealand All Blacks, we bet you’d instantly have a picture of their playing strips or at least their famous colours in your head.

Custom sportswear isn’t just playing strips and kits either. The training, pre and post-match wear and any accessory that’s branded with a club crest are included in a team’s sportswear. Ensuring that everything is in line with a club’s branding creates a professional image for clubs and shows that they’re well-established and connotes success.

Sports clubs have a rich history and heritage and custom sportswear is the perfect way to show this off. Team members should be honoured to wear the shirt and portray the badge – it’s not just another shirt that they slip-on. Personalised sportswear helps emphasise this prestige and is a constant reminder to players who they’re representing.

Why is Custom Sportswear So Popular?

As we’ve briefly mentioned, there are various positives for businesses choosing to implement custom sportswear. One of the main reasons custom sportswear is so popular is to differentiate teams from their rivals and help them stand out on and off the pitch. Think about it, successful teams don’t want to be considered in the same picture as inferior clubs, do they?

Plus, if you’re playing against an opposing side and each player is in the same or similar coloured strips, how will you know who’s on your side? This will result in a poor standard throughout the respective sports and would be incredibly confusing. Nobody wants to sit down and watch a sport where the ball is constantly being given away and the players are always confused.

Sports teams are proud of their history and where they’ve evolved from. Custom sportswear allows them to always be tied back to the founding eras of their club. They may have enjoyed long periods of success in the past, so clubs don’t want to move away from this and want the current side to still be thought about in the same way as their successors are. Although sports teams have been known to change their strips from time to time, they’re never usually wholesale changes and will still convey the usual colours you’d associate with the team in the first place. Changing a team’s long-standing colours or crest never usually works out well.

For example, in 2012, Cardiff City Football Club made the switch from their recognisable blue, white and yellow shirts to a more dominant red. They also changed the crest to try and appeal to international markets. These huge changes didn’t sit well with the fans who protested and were incredibly disgruntled.

After underperforming in the new brand colours, the fans got their way and the club reverted to its traditional colours from thereon. This just shows the importance and popularity that custom sportswear has for sports clubs – not just professional ones either.

When teams arrive, perform and leave games all in the same gear, it creates a true sense of unity within the team. What good is a team full of individuals? Teams should be made up of a select amount of people all working together towards the same goal, not individuals pulling in different directions and only looking out for themselves.

Custom sportswear reinforces that mentality. Team members can simply look down at their shirt and be reminded who they’re playing for and why they’ve been trusted to wear those colours with pride. When full teams are wearing club-branded clothing, it shows that they’re all equal and nobody is superior.

It’s reassuring to know that on the field you have other team members who are working hard to achieve the same things as you are. They have your back and you have theirs. This strong partnership and bond that’s formed with the wider team is imperative if you’re going to be successful – and something as little as personalised team clothing can be a big step in forming the trusting relationship.

The last thing teams want is to go under the radar – especially successful ones. You want somebody to take one look at your playing kit and instantly recognise your team, the way you play and have your core values at the forefront of their minds. Without custom sportswear, how would this be possible? All people would see is a group of players in different coloured shirts and it’d look very untidy and unprofessional. That being said, you need to make sure that your custom sportswear is designed and created to a high standard. Poor standard design connotes a similar playing style. You could be the greatest team in the world but if you look cheap, you’ll be remembered for all the wrong reasons.

Arriving, training and playing all wearing the same uniform creates a level playing field for team members. That way, each player is just as important as the next and nobody is looked at as a weak link or a spare part. This is huge for teams. If people believe that they’re holding the team back, it’ll start to reflect in their performance.

This can cause a ripple effect throughout the team and create poor team morale. Strong morale is one of the main pillars of success that great teams are built upon. Tight bonds between players are influential in creating amazing results on and off the field. Teams are made up of individuals, but if they gel as a unit, they become a lot more forceful and effective than if operating with their own best interests at heart.

Custom sportswear is a constant reminder to players that they’re part of the team and everything that they do should be to better the wider team. This sense of togetherness brings teams closer together and unites them in ways that can’t be achieved on ability alone.

A Sense of Style

Although sports teams are there to compete, not do the catwalk, a lot of clubs like to introduce custom sportswear as it promotes a sense of style to their game. The kit you wear when playing will reflect the methodology behind what you’re trying to achieve on the pitch. If you rock up to the game in rags, it connotes a poor style of play before you’ve even started. Custom sportswear doesn’t end at the playing kits either – as we’ve mentioned. Your style runs through the heart of the club, from your training wear to even any merchandise that you sell. You want to be remembered for your results on the pitch, not having the worst gear in the league and becoming a laughing stock.

So, as you’ve just read, there are many reasons why custom sportswear has been popular for many years – and it won’t be going anywhere fast too. So, sports clothing businesses will always have a market, as long as there is sport being played professionally and at grassroots levels too.

But you can’t expect to produce any customised sportswear and get away with it. It needs to be the best standard possible to impress clubs and keep them coming back for more. A lot of businesses specialise in various sports, to widen their target market. To do this, you need to have the right equipment in place to produce quality time and time again on a multitude of garment types and materials.

Industrial embroidery machines are key to producing high-standard products. For more information on how they can help drive your business forward, download our free guide and see which ones are most suitable for your business today. 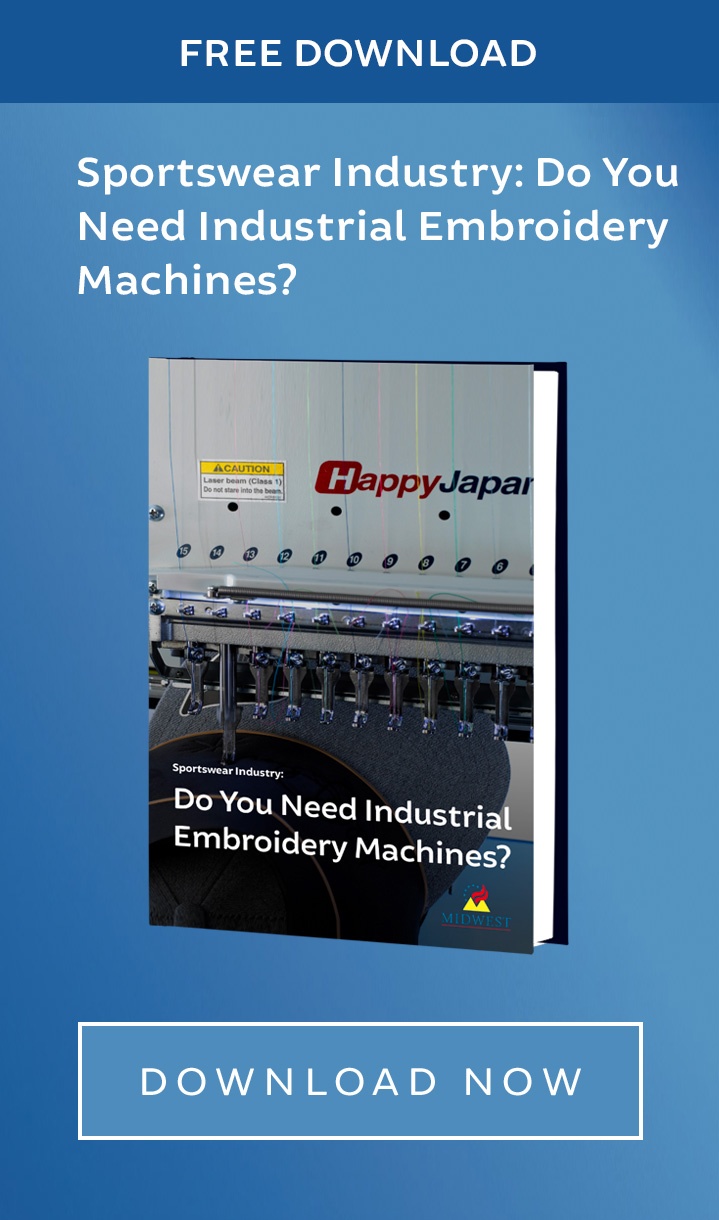 Should You Upgrade to the HCS3? When’s the Right Time?

Are you polar focused on accuracy? Are you looking for something more compact? Maybe it’s time to consider an upgrade.  We understand that looking at a potential upgrade can be nerve-wracking as it usually involves dipping into your budget and learning a new piece of tech. Aside from this, it’s an exciting time for your […] HappyJapan HCS3: The Key Improvements From the HCS2

We understand how difficult it can be to decide what embroidery machine is needed to expand your production. We’re the UK’s largest supplier of compact, commercial, and industrial embroidery machines so rest assured, we know how to guide you in the right direction. Do you need the latest technology? Whether you’re looking to invest in […] No matter your working space, when you’re just starting out, you don’t want this to hold you back or limit your capabilities of growing an empire. Instead, you make use of the space you do have – you invest in time savers and space savers. Having the latest technology is great, but you want to […]

Read More
Get in Touch